The acquisition of Twitter Inc. by the world’s richest man, Elon Musk, has been the year’s hottest business headline. The purchase appears to be a classic example of Activist Value Investing.

Similarly, today we will talk about a stock – Atul Auto Ltd, which appears to be a real case of Activist Value Investing.

According to valuation guru Aswath Damodaran –

“In activist value investing, an investor targets companies that are not only cheap but have been poorly run, and then invest resources (and you need a considerable amount of those) to push for change, either in management practices or personnel. The reward to the investor comes from activist investors being the catalysts for both price change in the near term, as markets react to the news and changes in how the company is run, in the long term.”

Sometime last month, our spidey senses alerted us to Atul Auto Ltd., which had zoomed over 25% in less than a week. Initially, we thought to ourselves, ‘meh! It’s probably just another pump and dump’.

But then, to this blog’s luck, we noticed an interesting filing by the company on the exchanges.

The company’s board had approved a preferential issue of warrants worth Rs.100 crores to Ace Investor Vijay Kedia at Rs.198 each convertible into equity shares with a period of 18 months.

Mr. Vijay Kedia had been a long-time investor in Atul Auto, as his stake in the company went back to 2005. In fact, AAL has been one of his most lucrative stock picks, which got him the “ace investor” tag on Dalal Street. According to StockEdge data, he held a 1.47% stake in Atul Auto and is also on the company’s board.

Moreover, Mr. Kedia held a much larger stake(over 15%) in AAL in 2014. However, he reduced his stake to around 1.17% soon after. This was almost perfect timing as the stock’s last upcycle was during 2014-15, when it made its previous all-time highs.

The stock has been underperforming since its previous all-time highs set in 2015.

With this allotment of warrants, Mr. Kedia’s stake in AAL would increase from 1.47% to over 20%, taking him most likely to a promoter-level entity.

So, let’s try and decipher what got this ace investor interested in this beaten-down, poorly-performing company?

Atul Auto Ltd., established in 1986, is a 3-wheeler(3W) manufacturer based out of Rajkot, Gujarat. The company is promoted by Mr. Chandra and Mr. Patel and their families.

It has a broad-based presence across 3W segments, including 6-seater Auto Rickshaws, 3W Auto Pick-Up Vans, and Chassis of Passenger Vehicles. It manufactures and sells vehicles under the Atul Auto brand, spares, components, and allied products.

It offers a range of fuel types for its products, including CNG, petrol, diesel, and electric(lead acid-based batteries). Atul Auto is also working on Lithium Ion based Electric 3Ws through its subsidiary Atul Greentech.

Atul Auto has a subsidiary Khusbu Finance, an NBFC exclusively funding Atul 3-wheelers (70% of the book). Although the NBFC also finances 2-wheeler purchases of retail clients. In FY22, it disbursed loans of 79.55 cr. (vs. 64.47 cr. in FY21).

Another subsidiary, Atul Green Automotive, sells spare parts for Atul Auto’s vehicles to certain international markets. It had revenues of 2.08 cr. with a PAT of 1.54 lakhs in FY22.

Now, before we analyze Atul Auto’s business performance and future plans, it’s important to understand the dynamics of the 3W industry.

Dynamics of the 3 Wheeler Industry :

3W vehicles are primarily meant for commercial usage, operated largely by small & micro business owners; because of this, retail finance is considered the lifeline of the 3W industry. Over 90% of 3W sales are dependent on finance by banks and NBFCs.

Due to the pandemic in FY 21-22, financial institutions faced unprecedented challenges with loan recovery. A rising number of defaulters led to restrictions on the issuance of new loans. As a result, the market witnessed a huge influx of resale(used) vehicles that affected the sales of new 3-wheelers.

To top it all, there was a shift from BS4 to BS6(environmental) engine norms. This increased production costs, resulting in price hikes across the industry. Such combined adversities took a heavy toll on the growth of the 3W segment across the country.

This begs the question.

Has the 3W market reached its bottom, and is the worse behind us?

Despite the odds, the 3W segment has witnessed robust growth(more than 50% YoY) in FY22 and continues to grow in double digits YoY.

However, unlike other segments of the Auto industry, the 3W segment is still behind its pre-covid levels. The latest data from October 2022 showed a massive growth of 66% YoY but was marginally below the red line in 2019 by de-growing -0.6%.

But the sub-category data clearly shows a massive shift towards Electric 3Ws while Combustion Engine(ICE) vehicles are no longer favorites.

EV 3-wheelers are now contributing 45% + market share in this segment and will soon surpass the ICE sales in the 3W category in a matter of months.

Therefore, the 3W segment presents many opportunities for new and existing players. This segment would certainly be privy to intensified competition for the next few months in the battle for market leadership. Currently, the leaders in the E-3W segment are unlisted players.

Why have Atul Auto shares been an underperformer since 2015?

Coming to Atul Auto, the stock has been a major laggard since 2015. Let’s try and understand where they went wrong in an already competitive industry faced with several headwinds.

For several reasons, Atul has been rapidly losing market share in the 3W space to its competitors.

While Atul’s sales have been recovering, the intensity of it has been slower than other players in the industry. The primary reason is Atul’s sluggishness in adopting EV technology to replace its current ICE(combustion engine) vehicles. Thus we feel volume recovery to pre-covid levels may take longer in Atul’s case. 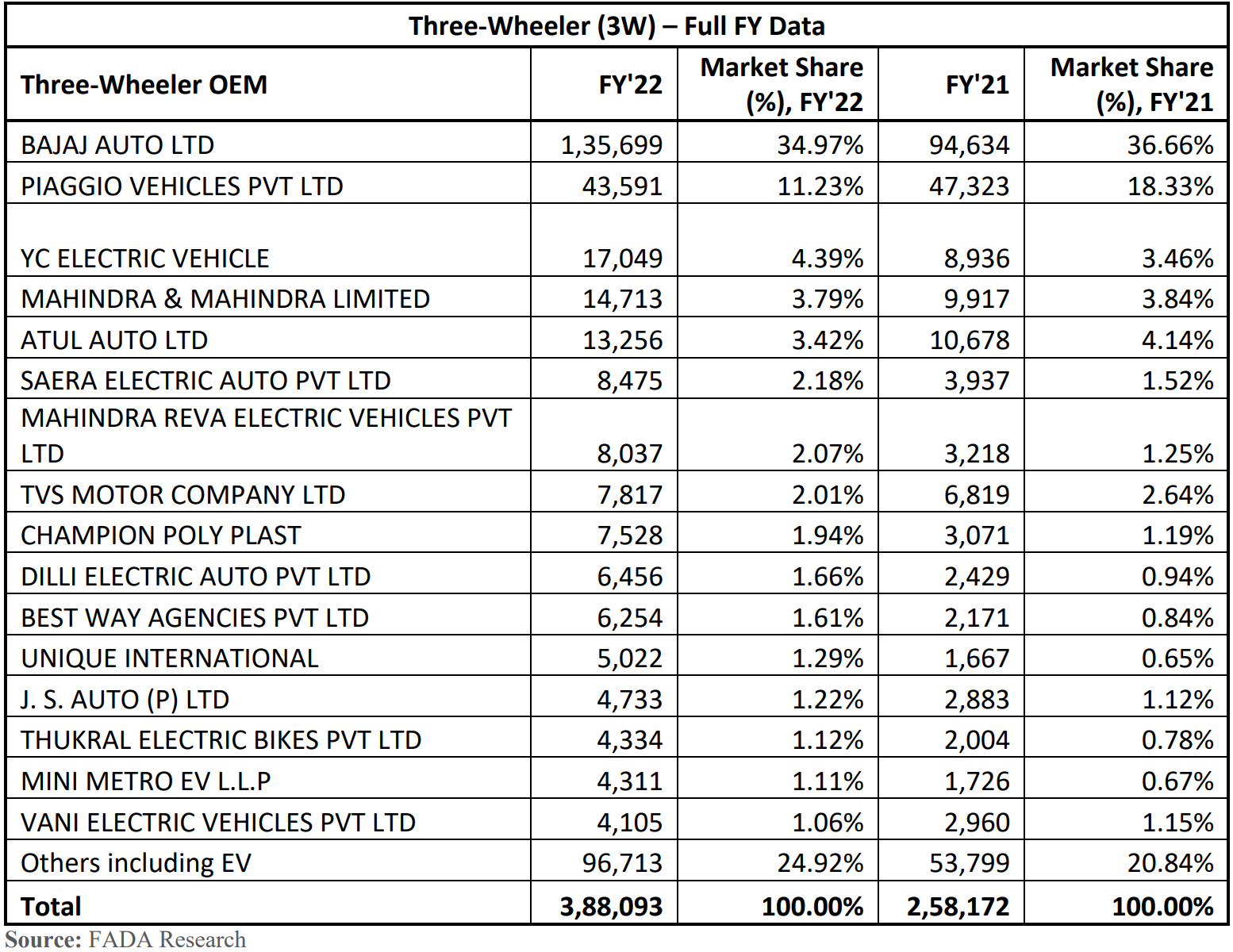 Atul’s presence currently in the EV 3W space is next to none; despite that, it has maintained a decent 5th spot with a 3.42% market share in the domestic industry in terms of volumes(FY22)(source: FADA).

The data in the table above includes EVs as well. But if one were to consider only ICE volumes, Atul’s market share would be even higher and would rank it at the 3rd spot, behind Bajaj and Piaggio. So, from a brand perception, we believe Atul is still among the top 3 players.

Atul had been competitive in the diesel 3W space. However, alternative fuel engines such as CNG and electric are now clearly the future. The management at Atul is cognizant of that and now seems to have a plan for this technological transition.

The Road Ahead: Is this where Vijay Kedia finds value?

One thing’s clear, the management had been late in seeding the market with technologically advanced vehicles, particularly in the EV domain. But with changing trends, it’s imperative for the company’s survival to adopt and invest in new technologies. In this regard, the management has undertaken vital steps to address the latest challenges.

For its EV models, the co. has tested and homologated a model with fixed Lithium-ion Battery Packs. The launch of which is expected in FY23. Further, Atul Green Automotive Pvt. Ltd. has partnered with Honda Power Pack Energy India and Valeo to develop a prototype Cargo and Passenger 3W with a reliable Honda Mobile Power Pack e: Swap & Valeo powertrain system. This is a remarkable step towards providing swappable battery solutions in the 3W segment.

Although the financial charts below show worrying numbers, and while the company has been poorly run in the past, the new initiatives are promising. Going ahead, a month-on-month increase in vehicles sold would be key for improving all the other metrics.

The partnerships with Honda and a European company are really encouraging developments. Such initiatives would help the company produce advanced and cost-effective EV solutions in the times ahead, enabling it to participate competitively in the growing electric 3W market space.

Although the financial charts below show telling numbers, and while the company has been poorly run, the new initiatives seem promising. A lot now depends on the company’s ability to introduce a quality E-3W and ensure production capabilities for the new vehicles.

Stocks of Atul Auto may head for a rerating in the longer term if the partnership with Honda and introduction of a new promoter entity prove fruitful. Therefore, an investor must keep Atul Auto on their radar and track the latest developments around the company.

We hope you liked our content, so keep an eye out for the next blog under the “Stock Insights” section. Also, please share it with your friends and family.

SE Blog- How to beat the street with Sector Rotation Strategy.

Gati Ltd. - Can it ride the Logistic Industry's Tailwinds?